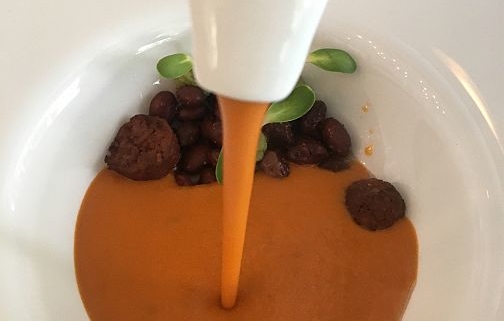 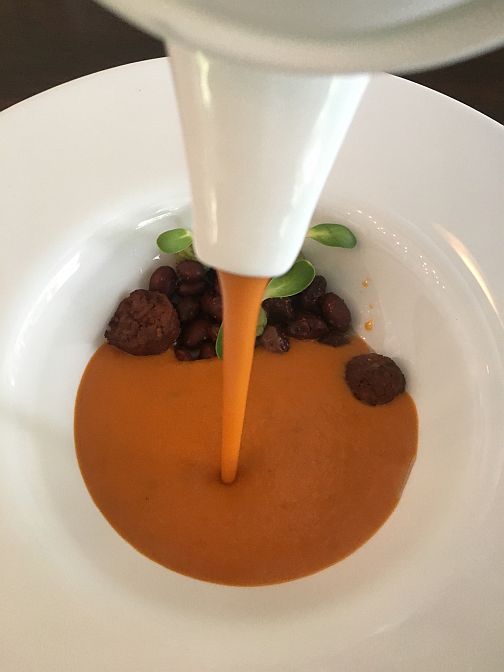 I DON’T know if there’s such a thing as restaurant or food trend in this city. A few years ago, people were crazy about things artisanal–from breads to pizzas to gelatos and coffees. Then, the ramen thing: one ramen shop would crop up after another, and we have seen long queues outside ramen bars.

About the same time, we had this samgyeopsal craving as Korean restos and convenience stores were sprouting at every corner.   It is safe to say, our palate has developed an appreciation for well-made, even handcrafted food, and international flavors as evidenced by huge sections in our supermarkets devoted to imported ingredients for various cuisines. Couple that with a number of international culinary schools hereabouts training a new breed of chefs.

While this sounds exciting, I still think the whole local dining scene is pretty relatively conservative, if not, traditional. Well, conservative or traditional is not exactly a bad thing (that is, when food is born out of a sincere intention to stay true to the ingredients, representative of the terroir from which they are produced; to be faithful to the techniques and cookery and culture from which a cuisine emerged).

But based on what I’ve seen—or eaten, in this case—there is, sad to say, a dearth of invention, creativity and some dose of playfulness to what local restaurants have been dishing out of their kitchens—from plush “buffet behemoths” to mid-to-high-end specialty restaurants, in and out of the malls. (In terms of service, there’s still much to be desired, though. But that’s another topic.) 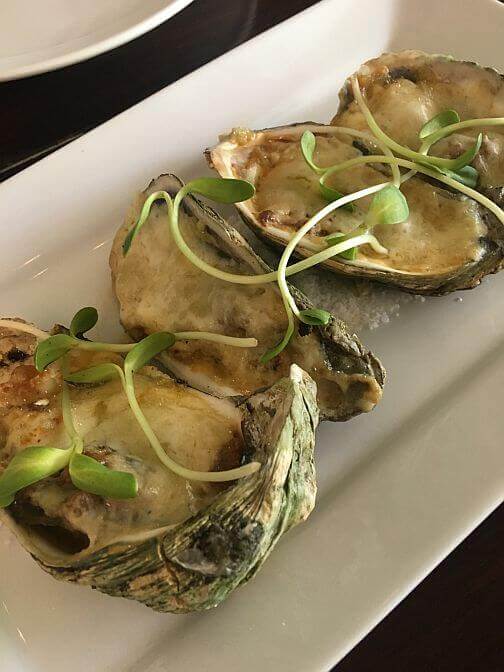 From Kayu’s a la carte menu, we ordered this started: Oyster, chorizo with mozzarella.

What I’m trying to drive at is that with the availability of ingredients, classically-trained chefs coming out of schools and kitchens here and abroad, and new modern cookery techniques and equipment easily accessible, the gastronomic landscape couldn’t be any more exciting and progressive. The local dining experience could actually shoot up to a whole new level, what with everything we can experiment on in the kitchen. Until very recently, a handful of local restaurants are coming out of the “conservative” mold, pushing forward new (to some extent, unfamiliar, as far as our palates are concerned) flavors and flavor pairings, using more polished cooking techniques, and a lot of finesse.

One of them is Kayu, short for the Cebuano word kalayo, which means fire. Last week, I brought my partner, Enrico, to lunch at this modern-fusion restaurant nestled in the quiet posh neighborhood complex in Lahug called 32 Sanson by Rockwell.  Just as when we got there, Enrico said, “Finally, a restaurant like this in Cebu.” He knew then he was in for a dining experience, and added, the place reminded him of the setting and ambience of Suhring and Bo.Lan (ranked #13 and #19 in Asia’s 50 Best Restaurants of 2017), two of the restaurants we had degustation dinners at in our recent trip to Bangkok.

Because it was lunch, we were offered the Lunch Set Menu, which we thought was very reasonable at P450 per person for a 4-course meal (it came with a round of iced tea, but we also ordered two bottles of sparkling water). From the a la carte menu, we ordered one appetizer (oyster with chorizo and mozzarella).

I remember a renowned American chef once said that fusion cuisine should happen organically, delineating that fusion should not be a deliberate effort like picking out flavors from the East and mix it with South American flavors.  Kayu’s Chef Izzy’s dishes and flavors are a work of various influences, cultural references, and a palate that is refined by exposure to world cuisines and cookery (not to mention his culinary degree from a topnotch American culinary school, and two years’ experience in the kitchen of Chef Masaharu Morimoto). 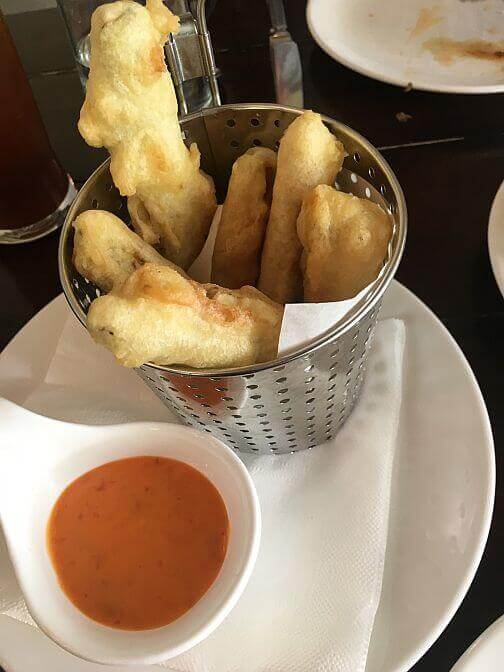 With our prix fixe lunch menu, we were surprised that well-made, balanced dishes, that were beautifully plated, could come out of it—for only P450. We were pleased with the tomato sriracha soup with spiced black beans and chorizo, after Enrico had a fun time gobbling up much of the eggplant fries. I had shrimp pasta (with tempura fries and bonito flakes) for main course, while Enrico had his parrotfish (with gochujang aioli, sushi rice, and bokchoy and a sprinkling of sesame seeds).  To cap our meal, each of us was served with deconstructed cheesecake, about which I had mixed feelings. (To me, it lacked some spunk to make it more vibrant, with flavors and textures teasing the palate.

I want my desserts, being the last course of a meal, to have some element of surprise. Maybe I will try making my own deconstructed cheesecake.)  After the first time I went to Kayu for dinner in December of last year, I went home thinking about the beetroot salad (me, being a beetroot fan), which was served with goat’s milk ricotta, tzatziki, guava gel, orange, garam masala vinaigrette. This marriage of flavors inspired me such that a few days after, I made my own beetroot dish: beetroot gnocchi with pesto core, orange and ricotta cream.  Another memorable dish from that dinner was Pork Pork Pork, one of their bestsellers. It was served with grilled apple puree, sauce chasseur, braised cabbage and shiitake risotto.

View the article as featured in http://cebudailynews.inquirer.net/154775/finding-new-flavors-new-places

Want to join the discussion?
Feel free to contribute!